LED plant lighting: short-term obstruction, the future can be expected

And this layout has also improved the performance of related companies. LEDinside, the Optoelectronics Research Division of TrendForce, found that most companies benefited from plant lighting and achieved outstanding results in the first half of this year. 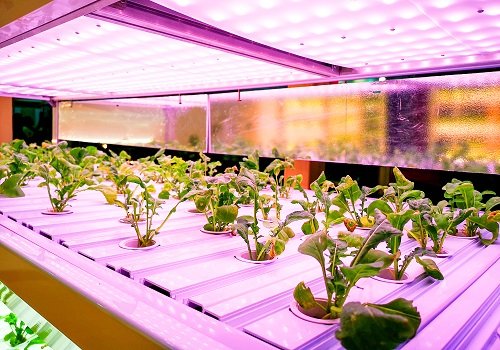 However, since the third quarter of 2021, red LED chips for plants have been squeezed out by the market demand for automotive and infrared LEDs and there has been a shortage, especially in high-end chips.


At the same time, power driver ICs are still out of stock, shipping schedule delays and North America's crackdown on illegal indoor cannabis growers have also affected the performance of terminal product shipments, causing some LED plant lighting manufacturers to slow down their production plans and material stocking efforts.

The rapid development of plant lighting casts a shadow. In the future, should we move forward in the wind and snow and break the ice, or should we stop in time and end when we see it? In order to understand the company's layout and strategy in depth, LEDinside conducted in-depth communication with first-line companies on the pain points, difficulties, and market development trends of plant lighting.


For different purposes, customers have different requirements for chip performance. HC Semitek pointed out that LED plant lighting requires chips with higher light efficiency and higher reliability. When pursuing the light efficiency of 230lm/w, it is necessary to use specially optimized substrates, flip-chips, special mirrors and other technologies; when pursuing high reliability, the process control and the selection of key raw materials are proposed Very high requirements.


On the packaging side, Hongli Zhihui pointed out that the biggest difficulty in entering the LED plant lighting market lies in the development and production of a set of high-yield and high-quality LED plant light sources or lamps. The integration and development of the three semiconductor technologies.


National Star Optoelectronics stated that the difference between plant lighting and traditional lighting is that plant lighting is more in line with the growth characteristics of plants. It needs to be considered from the perspective of bio-optics, not only to match the needs of different plants for PPE/PPFD, but also to combine The growth of plants at different stages is adjusted to the spectrum formula. In this regard, NationStar Optoelectronics is also at the forefront of the market. It has a professional plant growth laboratory and a spectral database that simulates plant growth.


Ruifeng Optoelectronics believes that entering the plant lighting market requires not only a reserve of light sources and module technologies, but also an understanding of the market and policy trends. In addition, for different regions, different plant species, and different growth stages of the same plant, it is necessary to establish the most suitable and efficient "light formula" database and corresponding programs, so the stickiness between the supplier and the demander is also higher.


Jinko Electronics said that plant lighting is based on high-power and high-efficiency products, which requires companies to accumulate for a long time in LED packaging technology. At the same time, customers have higher requirements for the lifespan of LED plant lighting products, and the products need a 5-10 year quality assurance.


Xuyu Optoelectronics believes that plant lighting products are special lighting products for plant lighting occasions. For example, according to the application object of plant lighting, it is necessary to design a spectrum that can cause a specific response of the plant; according to the particularity of the spectrum, it is necessary to use the rich and adjustable spectrum performance of the LED to realize and optimize the spectrum. From the perspective of packaging, excellent packaging technology is required to achieve high light quantum efficiency and high reliability products, and excellent optical design is also required to maximize light distribution and intensity.

1. Technical threshold. Plant lighting drivers are developing in the direction of higher power. At present, the power supply on the market has reached 1200W, and it may increase again in the future. This poses a great challenge to the high-power driver design and production capacity of new manufacturers.

3. Market threshold. It is reported that both the product quality and the enterprise itself are facing the problem of customer trust and recognition. If there is no suitable entry point, the customer will not rush to introduce a new manufacturer as a supplier.


Input-output ratio becomes the focus of attention of the terminal

Tiandian Optoelectronics pointed out that in the application scenarios of plant lighting, electricity bills account for the highest proportion of customer expenditures. Therefore, the current difficulty of promotion focuses on how to balance the contradiction between short-term cost increase and long-term benefit release.


Jinko Electronics pointed out that LED plant lighting has a bright future. In addition to emerging products, traditional growers will also use LEDs to replace traditional lighting. However, the one-time investment of LED plant lighting is high, and the effect period is long, which has become the main concern of farmers.


In addition, Jinko Electronics also pointed out that currently, the main market for LED plant lighting is overseas, which is affected by many factors such as cost, planting area, crop maturity, and local environment. But at the same time, the domestic market is also gradually developing. In the future, with the advancement of LED technology and people's unremitting pursuit of quality, the domestic market will gradually develop.

Hongli Zhihui also expressed its views on the uneven development of plant lighting in domestic and overseas markets.


According to reports, plant lighting is moving in the direction of specialization, efficiency and intelligence, but high-quality LED plant lighting manufacturers are mainly concentrated in foreign countries, and the layout of domestic manufacturers is not very obvious. On the one hand, the domestic plant lighting industry is in the early stage of development, and the products are still mainly low-end products for export; on the other hand, because domestic plant factories have problems such as low input-output ratio and expensive output products, this has also become a problem. The main obstacle for LED companies to develop plant lighting.

In addition, the lack of industry standards is also a problem that needs to be solved urgently in the promotion of plant lighting.


Ruifeng Optoelectronics also pointed out that plant lighting is a multi-disciplinary comprehensive technical field, and the industry lacks a unified standard. At the same time, plant lighting needs to be combined with the actual needs and usage scenarios of customers compared with conventional lighting. A reasonable and efficient solution actually verifies the introduction cycle. Longer.

Moso Power believes that it is difficult to formulate standards that are helpful to the development of the industry before the society has enough knowledge of a new industry. The formulation of standards is a dynamic process and needs to be carried out when the industry has developed to a certain level. Once it is formulated, and once the standard is found to have lagging problems, it needs to be revised in time to keep it forward-looking.


Shocked in the short-term, can be expected in the future


The people regard food as their heaven. Food is an essential part of human survival and development. LED plant lighting solves the influence and restriction of climate, geography, space, etc. on plant growth, and can accelerate plant growth and reduce the use of chemical substances in a scientific way, so as to achieve "food safety first". In addition, LED plant lighting is naturally environmentally friendly and energy-saving, and it is an extremely important part of smart agriculture with technology as the core.


It is worth noting that although LED plant lighting has bright development prospects, its short-term development is restricted by both internal and external factors.


On the one hand, LED plant lighting still has many problems.

At present, the industry has insufficient understanding of the core growth elements of different plants. For example, the optimal demand for the spectrum of different crops at different growth stages still needs further research.

At the same time, it is not easy to integrate a more advanced intelligent control system into the existing lamps.


Hongli Zhihui believes that plant lighting has a strong demand for intelligent control of light quality and light quantity. Therefore, an intelligent control system is added to a variety of monochromatic spectrums to realize time-sharing control and photosensitive control, and timely according to the growth state of plants The output of adjusted light quality and light quantity is bound to become the main trend in the development of plant lighting technology in the future.


Zhaochi Semiconductor pointed out that red light chips for plant lighting have high quality requirements. Different manufacturers have unique matching solutions in the design, extension and chip technology of red light plant lighting products. This is the core technology of each manufacturer. And in the process of proper and reasonable matching with downstream packaging, and gradually improving the program, a closer relationship has been established. LED plant lighting naturally has the attributes of environmental protection and energy saving. In the future, the market game will become more intense, and technological precipitation and breakthroughs are also critical. In the future, the company will continue to deepen the field of plant lighting, through the combination of automation, scale, informatization, and technical standardization. , Overcome technical and cost difficulties. And this is also one of the main trends in the future of the plant lighting industry.

On the other hand, the external environmental soil of LED plant lighting is not very fertile.


Li Deda also pointed out that the homogeneity of plant lighting products is serious, and overseas customers There are so many choices, it is difficult to get the attention of customers, and the market competition is fierce. At the same time, the overseas epidemic is still serious, and it is difficult for companies to approach customers to open up markets.


Major manufacturers actively carry out systematic research and layout. While improving the technical parameters such as LED light efficiency, through cross-border cooperation or the establishment of biological research laboratories and other forms, a better understanding of plant physiology and other professional knowledge, so as to better integrate intelligent control technology and promote the plant lighting industry Chemical development.


It is undeniable that LED plant lighting technology can improve the quality of crops and enhance the taste of crops while shortening the maturity period of crops, thereby helping end growers reduce production costs. Looking forward to the future, under the requirements of ensuring food safety, people will shorten the food supply chain through the development of indoor planting agriculture and investment in vertical farms, and the global plant lighting LED market will continue to rise.


At the same time, with the long-term introduction of LED lighting equipment by greenhouse growers and emerging vertical farm growers, and the trend that the cost of LED lamps is expected to decline, the willingness of more indoor growers to replace traditional products with LED lamps can be further promoted. It is an important key to the growth of the LED market for plant lighting in the future.


LEDinside, the Optoelectronics Research Division of TrendForce, believes that benefiting from the promotion of policies in various countries and the mass introduction of LED plant lighting equipment in the North American medical and recreational cannabis cultivation market, the global plant lighting LED market will show explosive growth in 2020, with an output value of US$301 million. , An annual increase of 57%. This wave of growth momentum will also continue into 2021, and it is estimated that this year's output value will reach 399 million US dollars, an annual increase of 33%. 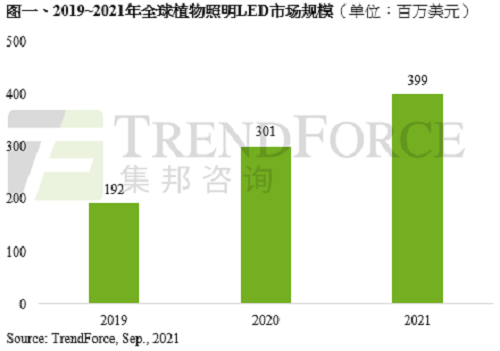 
As the traditional lighting business is gradually approaching the ceiling, LED plant lighting has become a new niche for enterprise development.